Steve Bullock, running for Governor of Montana in 2012 is our chief prosecutor.

Steve Bullock, as Montana Attorney General protected the unlawful act of a law student in Montana who did his dirty work, and the work for one of his employees, George Corn in Ravalli Co.

In fact, Steve Bullock is better than the FBI (or in bed with them) for violating their #1 criminal priority: use of public funds to protect a felon: Angela Wetzsteon.  Your state funds in Montana.
[perjury, impersonation of state officer]

Steve Bullock violated Montana Ethics rule 5.5 for helping Wetzsteon practice law without a license or Montana Bar License.  Even Steve Bullock's bar license means nothing if he does not protect it.

Steve Bullock asked for a criminal culpability statement for the Lincoln Co. Recall for petitioning their government. This is violation of direct wording in the First Amendment and the Montana Constitution.  Steve Bullock is above the law, the constitution, and Montana ethics laws.


How Steve Bullock prosecutes:
and deals with the "problematic" public
﻿

Spreaking in public was also not protected. Without threat, Felony Intimidation charges filed by Steve Bullock's Attorney General Office.  As you'll see below in affidavit form, Steve Bullock did the actual threatening.  As hundreds have already viewed, please find a threat of speaking in public:
www.findmythreat.com

Up in Smoke: Steve Bullock for Governor:
http://www.montanaattorneygeneral.com/2012_04_01_archive.html

The biggest Led Zeppelin for Steve Bullock as Montana Attorney General is the Zyprexa lawsuit he handled for the Attorney General office in 2007.  Note that Steve Bullock claimed he did not work for the Montana Attonrey General Office to try an avoid culpability for a threat to a Montana voter.  Chanllenge his County Prosecutor (George Corn) and loose your home, and your job from trumped up charges.  Note: Corn lost election, home was retained, reputation was not.
[ http://www.montanapoliticalnews.com/2011/06/recall-steve-bullock-of-montana.html ]

The Montana Zyprexa lawsuit defrauded the victims of the judgment.  They were not mentally ill, and Steve Bullock made a "Mental Health trust fund" to benefit non-victims.  This public fraud by Steve Bullock Montana Governor candidate was $14 Million dollars.  Steve Bullock stole $3.5M for the Montana Attorney General/Dept. of Justice in Montana from US.

Here are 7 reasons (with links) why Steve Bullock John Walsh should not be elected in 2012.  For John Walsh, he engaged in electioneering by using his Montana Guard Troops for political reasons.  The photograph taken of the troops is unethical, and unlawful.

The SEVEN reasons Steve Bullock should see and end to his public life:
http://wethepeoplemt.blogspot.com/2011/12/steve-bullock-for-montana-governor.html

This information of Steve Bullock is the truth, and we as Montana voters must stop Steve Bullock in November 2012.  Not like it is a big threat, only 40 people showed up for his talk on education.  Perhaps that is due to Steve Bullock throwing educators under the bus like the Ennis Superintendent, then wanting our votes.  Steve Bullock should have thought about that one first.

Unless Steve Bullock is a psychopath.  Addicted to his power in Montana.
with Steve Bullock's demonstrated problems with public finds (Zyprexa, Angela Wetzsteon) do we really want a dangerous person as our Governor? 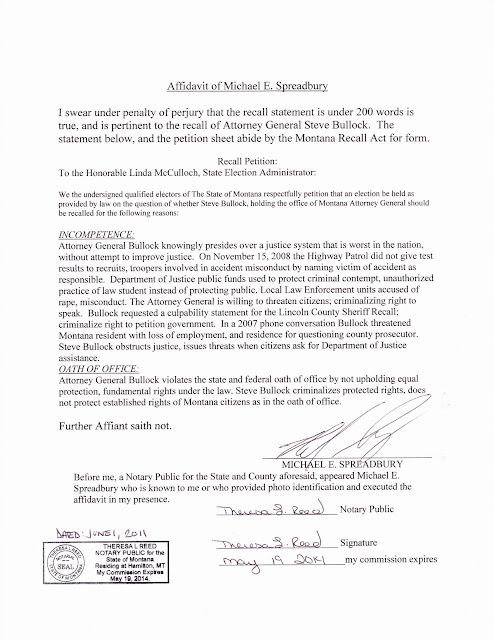 The Biggest Difference between Steve Bullock and Rick Hill is their public service.  Steve Bullock doesn't listen to the public, he controls them through fear and judicial system abuse.

Rick Hill has served Montana in the US Congress, and is listening to the peoples concerns about Montana Fish Wildlife and Parks....he is going to change the agency from top to bottom.  Steve Bullock looks the other way for FWP in Lake County, and uses them for his power plays over the Montana people (for political favors).

Steve Bullock has next to no signs in the Missoula or Hamilton area.  One of his signs is obscured by trees to where it is barely visible.  With few people turning out, let him FALL politically and not become governor, or anything else on a national scale...what a problem that would be!

Governor is just a stepping stone for Bullock.  Lets make sure the people make Steve Bullock very aware in Montana that his public life is OVER.

Please vote November 6, 2012 in Montana for Governor.  For Rick Hill.
Posted by Michael Spreadbury at 9:37 AM