A recent "article" by a Lee Enterprise "newspaper" named a juvenile defendant as an "ARSONIST" in the title prior to conviction; 'alegedly' (Lee's favorite word) involved in criminal mischief in the Hamilton area...prosecuted by Angela Wetzsteon of the Ravalli County Attorney Office.  The article, linked below did not name the charges against the juvenile, but named him several times, labled him an arsonist.  This is the journalistic lynching that Montana residents face, then face the 48th or worst justice system in America.
read more: Residents of Ravalli County Convicted prior to trial, prosecuted by criminals:
http://www.ravallirepublic.com/news/article_b6f949e2-b3fb-11e0-8d22-001cc4c002e0.html 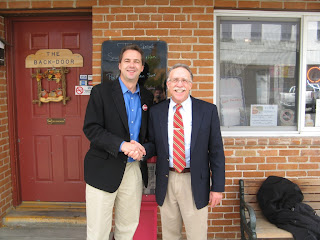 Bullock for AG
Bullock and Corn (shorter of two) with a "Backdoor Handshake" in Ravalli County.

A favorite by Ravalli County prosecutors (started by George Corn) is to prosecute minors in adult court.  It cost a 15 year old boy 5 years of his life due to the Montana Supreme Court not being able to find a transfer to adult court---because it does not exist.
read more: backissues of www.georgecorn.com

As a juvenile Probation officer was begging the court for custody of the minors, Angela Wetzsteon asked what would happen "if they screwed up again".  Well before we answer that question, what happens when Angela Wetzsteon screws up.  George Corn calls Max Baucus.  Steve Bullock and George Corn violate ethical rule 5.5 in Montana for aiding Wetzsteon in her unauthorized practice of law (as an unsupervised law student).

Steve Bullock is arrogant enough to run for Governor of Montana and use fraudulent public funds to protect Angela Wetzsteon.
Read more:
Steve Bullocks Montana: being above the law is what an 800Lb Prosecutor means...
http://www.montanaattorneygeneral.com/2011/09/steve-bullocks-montana.html

George Corn as prosecutor (and Angela Wetzsteon's supervisor as a law student) decided that the 8th Amendment was not necessary in Ravalli County Montana which caused 4 inmate suicides:
George Corn's Legacy:


Angela Wetzsteon was taught and protected by the BEST Montana has to offer.﻿

When Angela Wetzsteon "screws up" the entire state of Montana and beyond comes to her aid.  What happens when Angela Wetzsteon is a mom and cannot even understand her own evil?  Kids make mistakes, that is why they are minors, and they have PARENTS, or FAMILY.  GOD help Angela Wetzsteon's child WHEN he/she screws up, will it be "prosecuted" by mommy Wetzsteon?

Perhaps if a murder, rape had occurred and no reform was possible as spelled out by experts, then attempt to put them away.  Shame on Lee Enterprises for publishing minor's names, not detailing charges filed, only "alleged activity".  Way to ruin 'em early for profits.  PS your company is on the waste chute to bankruptcy, especially if these parents get wind of this article.

Prosecution, law enforcement more than willing to lie all dont help children who are allowed to make mistakes, unless you are in Angela Wetzsteon's jurisdiction.  If you are Angela Wetzsteon, you can defy a rule known, and enforced in 49 states besides Montana.  When you violate this rule and order of the Montana Supreme Court, and violate Montana Criminal Code, and your name is Angela Wetzsteon, you can abuse the people, their rights, and collect a large public salary.
[Ref: MCA 45-7-309(c) Criminal Contempt of the Montana Student Practice]

Prosecutors are supposed to help the public, and seek justice for victims.
In Montana, Prosecutors have no ethics, no law, and no common sense.

It helps when they have a mouthpiece to make everything ok.  Enter Lee Enterprises newspapers.
We think Lee Enterprises Sucks:
www.LeeEnterprisessucks.com ﻿
Posted by Michael Spreadbury at 10:01 AM