How does a prosecutor who committed crime stand in front of a court and ask a Judge to sentence a convicted criminal? That is the confusion surrounding Angela Wetzsteon in Hamilton Montana.

Violation of a court order is a crime, criminal contempt Montana Code Ann. MCA 45-7-309(c). If you do favors for the right people in Montana, you are protected.

Here is a video given to Bill Fulbright to prosecute unlawful activity of law enforcement. As long as the law enforcement is going after the right people in Montana, they are protected. 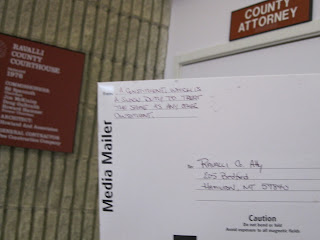 Selective law enforcement used to be actionable by the FBI
Bill Fulbright is Angela Wetzsteon's boss, ran for office on upholding rights.

The Montana Law school where Angela Wetzsteon is a 2008 graduate will not meet with the public, did not respond to an American Bar Assn (ABA) comprehensive report about Angela Wetzsteon '08.
read more: http://www.whistleblowermedia.com/2011/08/montana-law-school.html

The Angela Wetzsteon Law School
where criminal activity is our motto, and we allow violation of Constitutional right.
"learn the criminal advantage"
University of Montana Law schoool.

It is a wonder that Angela Wetzsteon can wake up in the morning and look in the mirror. The cold, calculating BS that crime is OK in the justice system if the target is approved. A candidate for Governor in 2012 Steve Bullock helped to protect the criminal practice of Angela Wetzsteon. He is required to not help any person practice unauthorized via ethical rule 5.5 in Montana.
read more: http://www.montanaattorneygeneral.com/2011/09/steve-bullocks-montana.html

It goes furhter than Steve Bullock. The Montana Supreme Court violated their own order for Angela Wetzsteon. The Montana Justice system selects and chooses who can commit crime. Has anyone noticed that Mike McGrath has gained about 50#----ITs called GUILT.

Do Montana residents wonder why we are last for economy, last for justice? When officials pick and choose who gets a pass for criminal behavior, and $40M law schools are rewarded for Angela Wetzsteon's unlawful conduct, there is no justice in sight.

The Angela Wetzsteon War--a post the CEO of GOOGLE and Jim Messina dont want you to see:
http://www.montanapoliticalnews.com/2011/10/angela-wetzsteon-war.html

The Jim Messina Political Show--and how he is too important for the law, or prosecutor ethics
http://www.montanapoliticalnews.com/2011/09/jim-messina-political-show.html

Mike McGrath stole $4M for the Montana Dept. of Justice with Steve Bullock in the Zyprexa lawsuit in 2007. read more:
http://www.montanaattorneygeneral.com/2011/11/steve-bullock-and-zyprexia-court-scam.html

That same year, the Chicago Times said McGrath should be disbarred like Mike Nifong of North Carolina for DNA gaffes:
http://www.ethicscomplaint.com/2011/05/montana-supreme-court-chief-exposed.html

Like I said about George Corn, available www.GeorgeCorn.com IT IS ONLY A VICTORY WHEN YOU PLAY BY THE RULES.

Angela Wetzsteon said she would uphold ethics, and did not.
TAMPERED EVIDENCE. entered into evidence after the discovery deadline.
[the "victim" scratched the wrong cheek]
Spreadbury was standing to this woman's left. Right cheek scratched.
Tampered evidence is supposed to be a felony crime. Not if you are law enforcement in Ravalli County Montana.
read more: http://www.investigativeblogger.com/2011/08/evidence-tampering.html
Ethics decree by Angela Wetzsteon.....that means nothing. 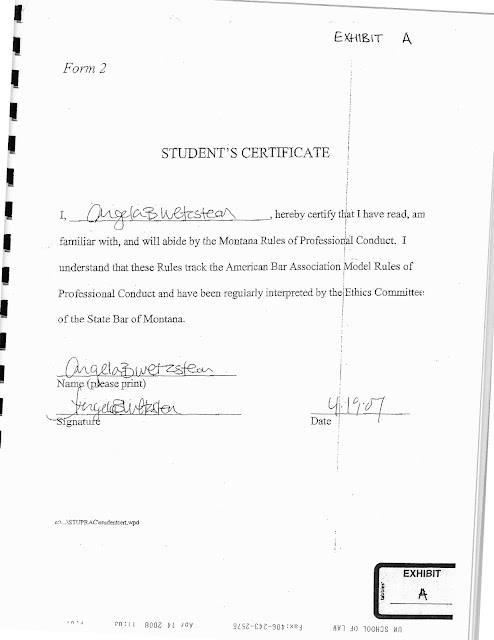 Angela Wetzsteon is lawless, but "upholds the law" in Hamilton Montana as a prosecutor.

look for the website www.AngelaWetzsteon.com soon. It will give a chance for Angela Wetzsteon to give up her law license, in exchange for taking down all posts about her on the internet.

Pretty Good Deal for Angela Wetzsteon.
Posted by Michael Spreadbury at 5:50 AM